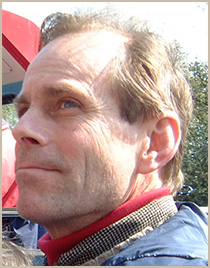 That summer, Richard traveled to Anchorage Alaska where he worked as an aluminum siding installer, his first real construction job. That fall he attended Prescott College in Arizona where he completed a 3-week Outward Bound program that served as the School’s orientation program. It was later that school year that architect Paulo Soleri recruited students at Prescott to become interns at Arcosanti, his alternative experiment in New Urban Architecture. Richard worked and studied at Arcosanti, where his love for the building process was fully realized.

1972 was a year of travel. Richard passed through the great cities of Europe, hitchhiking and staying in Hostels. Chartre Cathedral, Florence Italy and Athens Greece all left their marks, but it was Turkey, Iran and Afghanistan that offered the poignant lessons of cultural diversity. Another admission at college saw Richard enrolled at U of Michigan School of Art and Architecture, but the lure of independence and the desire to be in the work force lead Richard back to Northern Michigan where he began his apprenticeship with Monnie Bliss and his style of organic vernacular architecture. While working for Bliss, Richard received his Residential Builders License in 1974.

The late 1970’s saw opportunities for Richard to start his own Building business. He contracted for several new homes and started with one or 2 employees, slowly growing the business and building his circle of customers. Estimating, accounting and contract law were carefully developed in those early years, but it was always the creative joy and love for discovery that lead him on. Harbor Springs, Michigan was the perfect place to find a balance between the traditions of local craftsman and the art of fine architecture. Harbor Springs is a meeting place for families who are inspired by nature and want to express their relationships through fine construction.

Today, Collie Construction Inc. has twenty-five payroll employees and networks with artisans all over Northern Michigan and beyond. Besides new home construction, CCI does extensive remodeling and also cabinet and furniture making. The projects continue to become more and more challenging. There is still great joy in the process of creating. Northern Michigan has a long and deep history as a place where nature and art combine and are continually evolving. We value this relationship within our community and strive to “Aim High”.